For the hand drawn printable calendar of August 2014, I’ve given the squares some time off. Hope you can get used to viewing the August days in circular mode. It’s only for a month. By the time you’ve adjusted to this calendar’s round spaces… guess what – we’ll go back to squares. 🙂

It has absolutely nothing to do with printable monthly calendars, but I’ve looked up some stuff about ‘square’, as a word and as an expression.

Square can be a slang term for cigarette. Huh… I never knew. Clearly, not a smoker.

A person can be referred to as (a) ‘square’ as well. Urban dictionary, for example, gives the following definitions:

Then there’s the “we’re square”, which refers to not owing the other person anything (anymore).

Well, being called a square is definitely not a compliment most of the time – whether it means un-cool, not very fashionable, kind of thick, someone who doesn’t get it, or even someone who doesn’t make out at the end of a date! Also mentioned are unexciting, unadventurous, mainstream or dull and a person who plays it safe.

Historically, urban dictionary traces this meaning back to a person whose goal in life is to have three “squares” a day (meaning: meals), a roof over his head, a respectable job, a house, 2.5 kids, etc. Obviously, the expression used as such has been made popular by the ones who despise such a life, which doesn’t neccessarily include everybody. It may be horrific to some and a dream to others… and that’s just fine! As my great-grandmother used to say: “It takes all sorts of people to make a world.”

Speaking of all sorts of people… Did you know in French the word ‘square’ (when referring to a person) means something completely different? It’s actually following the same line of thought as in English, but in the opposite direction. Being square in French means to be impeccable, trustworthy, incorruptible and well-behaved. Someone with good moral. So whereas in English square isn’t really a positive label, being called square in French is a big compliment! Notice how in both languages it refers to very similar character traits, just focussing on the positive and negative aspects of that same way of being.

Isn’t it amazing how many directions the word square can take you in?
Okay, back to the circles now, with two versions of this month’s free printable calendar. 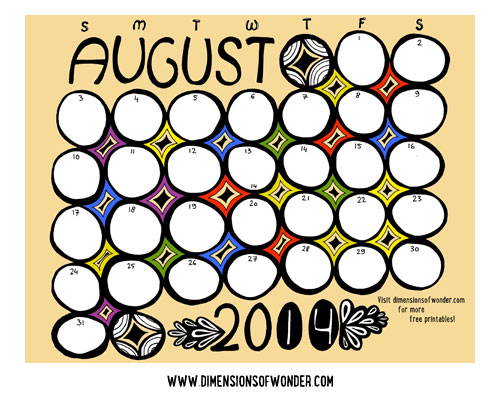 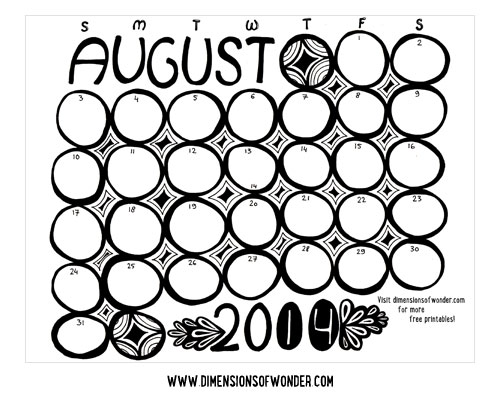 Download these two August 2014 free printable calendars using the button under the image. Check out with just your name and email address (free of charge). Emails are not given out to anyone else, ever. Only my cat, but she knows how to keep a secret.

Reminder: Both calendars come in the same download this time.

How about you, are you a square or a circle?

Do you enjoy structure and regularity in your life, or are you all about breaking routine with unpredictable actions?